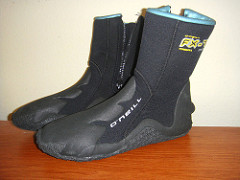 Not that kind of booty, surf booties, like the ones in the pic. I am gearing up for our big surfing summer and part of that is getting cold water gear for me and the kids. I'm pretty much set up with wetsuits, but I still need to find them for the kids. I have my sites set on a few options, but have not moved forward just yet. In the meantime, I needed to get some foot protection for myself. When I surfed in my youth I was not a fan of wearing booties, but you can pull that off when you live in Southern California. Even then, during winter months, the water was so cold that it felt like your feet were being crushed by a vice. Also, I'd surfed more than my fair share of rocky beaches where walking out to the waves was like walking on broken glass. Totally brutal.

As a consequence, I never really adjusted to the feel of wearing booties. I can't say I'm such a big fan. Now that we are on the east coast, I don't think I can avoid them. In New York and New Jersey the water gets very warm in the summer, but I've swam in Maine in August the water was freezing. I think for the second phase of my surfing life I'm going to have to get used to wearing booties, so naturally I set off on a mission to find myself a pair. Oddly enough it wasn't as straightforward as I thought it would be. Finding the right pair in a size that might fit me took some legwork. I would have loved it if there was a surf shop nearby, but we are landlocked, and most shops don't have a huge selection.

This meant looking online, where there is more variety and probably better pricing. The only problem is, you can't try them on before you buy them. Plus, you start to get overwhelmed with the possibilities. I had an idea of what I wanted but couldn't find a pair that fulfilled all my expectations, which is odd for the internet - it seems like you can find anything and everything. In retrospect, I could have found the perfect pair if money was no object, but as you know well enough, money is a huge object for me.

With this in mind, one important requirement was ease and cost-effectiveness of doing a return. I could estimate what size bootie to get, but if it didn't fit, I would have to exchange it for a pair that did. At some point it's just not worth it. I figured that if need be, one return would still make it cost effective.

I managed to find a pair online that I liked, and they offered free shipping and $5 return shipping. I think that's about as good as it was going to get, so I bought them. They arrived just the other day and they fit perfectly. I am so stoked, and might look to these booties as options for the kids, but I don't want to get too ahead of myself. Not yet, at least.

I think surfing is still a couple of months away, so I have some time to find the right gear at the right price, which sometimes seems like it never happens but that can't stop you from trying, right?