Going Back to Cali, part 2 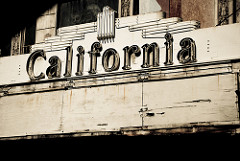 My trip back to Cali was actually a rather nice, albeit short, visit, and I think I may be making them on a more regular basis. Of course I have mixed feelings about this but on the whole I think it's a good thing. Even though I've had a turbulent relationship with my family, I'd like to be on more convivial terms with my mom. I can't control how she behaves or how she treats me, so it's really up to me as to how I respond. Perhaps the biggest hurdle is leaving mom and the kids and the distance to get there.

As I mentioned I haven't had much contact with my mom, at least not direct contact. We don't go out there much, and she has never and would never (I know this to be true) visit Vermont. Her impression of this area is that it's just a bunch of dirt roads and hillbillies, but that's a by-product of her ultra-urban lifestyle, which she loves. In the end, it's probably not a bad thing because there is just no way she would ever understand the rustic lifestyle that we've chosen to live. The idea of getting water from a well conjures up all the wrong images for her.

Despite my reservations about the trip, there were a lot of positives about it. My mom was happy to see me, and years of being in the doghouse seemed to have dissipated as I helped her out a lot. My efforts seemed to have earned me back her good will, not that that was the goal. I really would like to help her out, and suffice it to say that things will only get busier from here.

The trip was also nice because I got my board home, but was also able to connect with some old friends that I keep in touch with but haven't seen in awhile. They also bought me lunch so it was a score on the dietary front. I ended up hanging with my friend SV who is comfortably ensconced in a partial life of leisure after making some fortuitous investments in the market. His life situation suits him and I think he's enjoying himself. Either way, we hung out all day like we always do and I got some lessons in modern technology, which he is deeply connected with. The guy is knee deep in toys and gadgets, and it was quite the learning experience, at least for an old school dinosaur like myself. We did some sort of video conferencing with our friend MO, who happened to be at home, as well.

One final note on the good vibes from our trip was that it worked out well with my flight arrangements with JetBlue, which for the record is a great airline choice. While I had to sit in middle seats both ways, which is a drag, overall I thought the service was good and I had direct flights. I had an afternoon flight there and an early morning flight home, which is a bummer but it got me home at a reasonable time, so I was all for it.

Best of all, mom and the kids saw me off when I left and came to see me when I returned. I love when that happens.

Until the next time, thanks for reading, and thanks to MissMae for the pic.