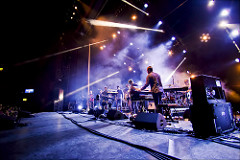 A has been quite the big city girl lately, heading down to the big city with her friends, sans mom or dad. She's so cosmopolitan. It bears mentioning that even though mom and dad are not going, parents are involved, and her friends are actually her bandmates and they are, for the most part, older and in college. I know this sounds like a potentially complicated situation, but we know and trust her friends, and as I mentioned, parents were present.

The first weekend she went down to see this band called Snarky Puppy, which is a jazz ensemble that is apparently the hot new thing. Several of them went to Boston and they later learned that other friends and bandmates were going as well. Very cool. A has begun developing an interest in jazz because her jazz band at school is encouraging it, and her bandmates are into it, as well. More on this at a later date. One of the dads, who is a music head, drove the guys down and they stayed at a relatives house in the city, which is pretty cool. They hung out in Boston, went to see the band, and had an overall really cool time. Plus, they got to see some killer live music.

The next weekend she went to Concord to do some music stuff with her band. Again, this was very cool because they are a talented bunch of musicians and they are taking their craft seriously. One of the bandmates used to live up here and now lives in Concord, so they stayed at his house and his mom prepared meals and put them all up. How cool is that?

All in all A had two amazing musical weekends in a row. It's very cool to see her so interested in music, though not just playing for fun, but taking it reasonably seriously. Who knows what will come of it but suffice it to say that she has mom and dad's support.