Christmas Reflections, albeit late ones 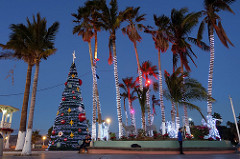 I realize this is crazy late, but it's such a nice time of year that I can't pass up the chance to reflect on the holidays, especially now that they're done and it's back to the daily grind.

Hope everyone had a nice Christmas, and even though the weather here has been a bummer, we had a really nice day. Not too crazy in terms of plowing through presents. We ate tons of good food and spent a lot of nice family time together, which you have to fight tooth and nail to maintain in the busy and hectic world that we live in.

Christmas Eve was the usual marathon, but we first started it out with a nice supper of grilled salmon, veggies and fresh baked croissants, the latter of which were the compliments of JR and RR, thanks a bunch. That night we watched our favorite Christmas movie, Elf, and then it was time for bed, at least for the kids. No rest for mom and dad as we prepared for the next day, wrapping gifts, getting them under the tree, and then having a little down time.

On Christmas Day we had an amazing breakfast, again, compliments of the Rs, of smoked salmon lox, more fresh baked croissants, onion/caper cream cheese, maple bacon, and fresh fruit. It was so good, I can't even begin to tell you. We chowed down and then the kids went about opening the gifts, or at least some of them. We had to delay opening all of them because of a glitch with the post office, which for the record has let us down a bit for the past few years with delivery failures. In the grand scheme of things they do a fine job, it's just that now and then, seemingly during critical times like the holidays, things get lost in the shuffle. Oh well, you just have to roll with it, right? I also managed to change the oil in my car, which was a relief because it was due and we are planning on doing a lot of driving as the new year approaches.

After breakfast we lounged and ate tons of sweets, and then, since the weather was so warm, we decided to get outside and get some fresh air so we headed over to Mt. Tom and hiked the summit. The weather was nice, high 50s or low 60s, but again, very strange for this time of year in New England. We need snow! There was an also an abundance of people hiking the hill, I'm guessing out of town visitors who came to ski but ended up hiking the mountain, instead. Afterward we hiked down to the car and had Christmas dinner, which was a bit of a production. We made prime rib, Yorkshire pudding, squash, baked sweet potatoes, spinach, and broccoli. This is the second time I've made prime rib and it was a little disappointing. I think I'm done with that cut of meat. When done properly you can't beat it, I just can't do it properly. Plus, it's an expensive piece of meat.

All in all we had a wonderful day and I hope that the same goes for everyone out there. Best wishes for the new year.


Until then, thanks for reading, and thanks to Days of High Adventure for the pic.
Posted by phredude at 3:17 AM