Pain in the Neck 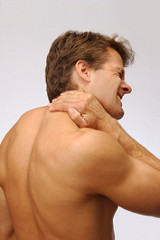 If you can believe it, I've managed to hurt my back again, and believe me when I tell you, it's a complete bummer. This time around, however, the injury is in my upper back, or rather my neck, which changes everything. As some of you may know, I've hurt my lower back on a number of occasions, and the pain and suffering were some of the worst I've ever experienced, despite my penchant for drama and whining. This time around, the pain is less severe but constant and unreachable, which makes it intolerable at times. I've found that when you have pain in your lower back, you can move around or stretch and at least address it on some level. With the upper back pain, I can't figure out where it's originating, and I sure as heck can't do anything about it except suffer... and not in silence, as you may have guessed.

The crazy thing is, I don't even know what I did to hurt it. It just started aching a couple of weeks back, and it hasn't gone away since. What makes it especially trying is that the times it hurts the most is when I'm sitting, so you can imagine how much I enjoyed the 6 hour drive to Quebec, there and back. Ibuprofen seems to help, and I found consolation in a friend who has not only experienced the same symptoms, but is a doctor and has some insight into ways to address it, not that any of it really works. I think the only course of action is to suffer. Oh well, what's a little suffering when you're training to be a real man?

Just for the record, as well as a chance to whine some more, my injury really makes it hard to drive around heading to work, transporting the kids, and doing my poster boy work. Also, feeling sorry for myself doesn't seem to alleviate the pain. Funny how that works.


Until the next time, thanks for reading, and thanks to Todd Cremeans for the pic.
Posted by phredude at 4:36 PM