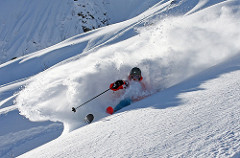 We have been doing a fair amount of skiing, at least before we fell into our state of malaise, and personally I'm pretty stoked about it and would do even more. I would say we've been going 2-3 days a week, and since we get free skiing through work, going for just an hour works out just fine. Unfortunately for A, she has been dealing with a bug so hasn't been feeling up for riding her board, though she did get a couple of days in. N and I have been been regulars on the slopes, and it's been fun, though the conditions are hardly optimal. Though we got some snow, it's not nearly as much as we are accustomed to at this time of year, and consequently, much of the hill is still not open. Kind of a bummer, but at this point, we'll take whatever we can get.

Skiing is a bit of challenge with my neck pain, but it's not insurmountable. I try to stretch on the lift ride up, and the occasional big bump on the way down can jar me in a way that hurts, but for the most part, it's been a lot of fun. N has been tearing it up, and it's fun to watch him. We finally managed to get bindings on his new skis, and like all things involving money, it was an adventure, to say the least. I don't know the first thing about buying bindings, in this day and age, all skis seem to come with them. For various reasons that I can't explain we couldn't use his old bindings, so I shopped around for new ones, not knowing what I was doing. In the end I trusted my good friends at Henderson's to steer me in the right path, and we got some nice Marker bindings. They cost a little more than I wanted to spend, but he can use them for years to come, and now that his skis are complete, he's really taken to them. I have to admit, they are very cool, and while this could be my imagination, I thought he really shredded with them on the hill. He may have felt emboldened with such bitchen skis, but he sure looked good. Most importantly, the skis look cool. When you're young, that's a very important consideration.

I'm hoping we'll get more snow in the coming weeks, but with the weather the way it is, you just never know. They seem to be getting all of our snow just south of us and in the west. Whose idea was that? We also need to get over whatever ails us.


Until the next time, thanks for reading, and thanks to Sochi Winter Games for the pic.
Posted by phredude at 7:20 AM