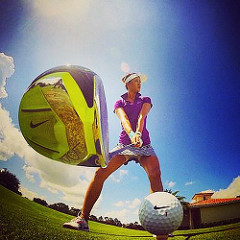 Since N has been getting into golf, naturally my OCD kicked in and I began to investigate getting him some decent clubs. He started off with a starter kid's set that I got from a guy in the next town and it seemed to work out fine. In fact, it was a fairly decent set with a bag that he could wear like a backpack, and he was into it. As he grew, however, it became clear that they were too small, and despite my suggestions that he use bigger clubs, he wanted to keep using them. I found another decent set at the recycling center that he was again reluctant to use (somehow my recommendations carry no weight), so I used them, though they were a little small on me. They were a big kid set and rather nice. It really took someone with clout and authority to get him to upgrade his clubs to the big kid set.

Then the other day we were at Golf and Ski Warehouse and the salesperson had him try out an adult club while hooking him up to their computer simulator, which is pretty cool. The way it works is you hit the ball into a heavy tarp and the computer extrapolates the arc and distance of your shot, calculating the velocity of the ball as well as the head of the club. Apparently he was swinging the club fast enough to warrant an adult sized club, and the guy kept showering him with praise about how fast his swing was at his age (he told him to keep it up). Granted, it could have been a simple case of a salesperson trying to sell us a club, but I go there fairly often (they sell ski stuff) and they don't work on commission. Plus, I'm pretty good friends with one of their managers and know he wouldn't try to pull one over on me.

Whatever be the case, they all enthusiastically suggested N was ready for a big-boy club, and that's all I needed for my OCD to kick in. I did some online research on drivers and found that like everything in life there is an overload of information. Consequently, I didn't know where to begin, but as luck would have it (or not?), they had a pretty cool line of clubs on clearance, and they steered me in this direction. Apparently Nike is getting out of the golf club business, focusing instead on what they do best with shoes and clothes. I read that Adidas is doing the same; I think they own Taylor Made but are getting out. Either way, Nike clubs are being discontinued so they were having a fire sale. For the record, the prices at Golf and Ski matched what you could online, which was more than 50% off. It was a good opportunity to get him a decent club that he could use for awhile. Plus, the Nike clubs look really cool.

So of course I got it for him, and he loves it. For all it's worth, and I think it's worth a lot, as soon as he got the new driver N was hitting it over 200+ yards, averaging about 225. That's pretty darn good for anyone at any age.

Since I was on a tear I decided to look at irons as well, thinking that drivers were the expensive part of a person's golf club set. I was unpleasantly surprised, however, to learn that drivers are the cheap clubs and the real cost of set is in the irons. They had clubs that were over $1000. Is that crazy, or what? I don't think I'm ready, or will ever be ready, to drop that kind of money on golf clubs, but I'll keep my eyes open for a life-altering sale.


Until then, thanks for reading, and thanks to sportstechie for the pic.
Posted by phredude at 6:51 AM